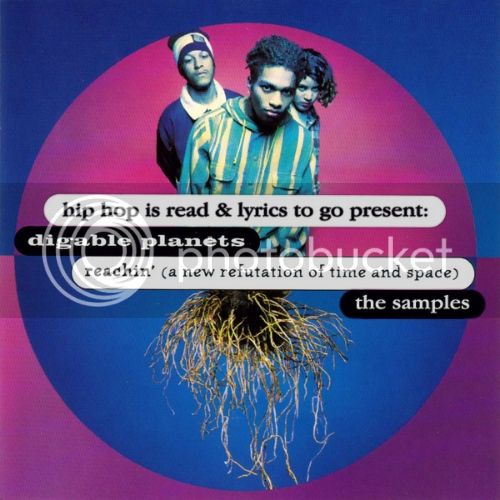 Every Thursdays we highlight a classic album, posting reviews written from back in the day. This weeks review is on Digable Planets “Reachin (A New Refutation Of Time & Space)” and was written by HipHopSite.Com’s Oliver Wang on January 1, 1997. (Original Post)

Back in the early ’90s, if you browsed the CD shelves of people who weren’t rap fans but were at least open to it, you were likely to find one or more of the following: Public Enemy’s It Takes A Nation Of Millions, Dr. Dre’s The Chronic and Digable Planets Reachin’. While it’s hard to imagine three more different albums – in musical texture and in lyrical content – they’re actually not that disparate at all. Each album was a costume for listeners to wear: for the hip-hop uninitiated, PE gave you a taste of militancy and righteous rebellion; with Dr. Dre, you got lurid gangsta tales and intoxicating party jams; and with Digable, you were transported into the black boho world of coffee house poetry readings and jazzbeaux record collections.

Simply said, on Reachin’ Digable was on some other shit, re-envisioning their Brooklyn home through insect metaphors that, looking back, still don’t make much sense but it still sounded good. In fact, it all sounded good and perhaps one of Digable’s great achievements is that people loved their songs without actually understanding any of them (don’t believe me? Try to recall the lines to any song off this album that’s not part of a chorus). The only exception might be “La Femme Fetal”, an unexpected polemic on pro-choice politics.

But if they lacked substance (and DP was hardly alone here), they came with ’nuff style to compensate, especially in the refreshing chemistry between Butter, Doodle and Lady (a formula so successful that, as rumor has it, it got the Fugees signed since they held the same two-guys-and-a-girl configuration). Mostly though, people jocked the sound of Reachin’ and it’s a testament to Butterfly’s production that the album’s music still holds up today, long after the group dissolved. Butter dug deep into soul and jazz catalogs from the 1960s and ’70s, layering and sequencing icy cool horn licks over walking bass lines and subdued drum breaks. It’s hard to find a bad track on here but standouts include “Swoon Units” with its sparkling sound, the midnight groove of “Pacifics”, and the stomping thump of “Time & Space (a new refutation of).”

What a difference a year makes. The Digable Planets’ transformation from insects to militants likely caught many off guard, not the least of which was their crossover audience who enjoyed Reachin’ as a latter day Birth of Cool for the hip-hop era. But Blowout Comb, with its Black Power iconography, darker moodscapes and socially incisive lyricism was a far change of pace from that easy going, happy-go-lucky charm.

The result was a commercial disappointment and no doubt helped to speed the group’s dissolution but the sad irony is that this was, by all measures, a vastly superior album over its predecessor. For starters, Butterfly and Mecca (Doodlebug shows up as a cameo more than a regular player) have tightened up their rhyme scheme considerably from the last album – riding rhythms with their flow like pros. Peep this one from Mecca on “Dig It”: “Meet me at the corner Murder and Adolpha/I bless you with some joints, the mental hollow points.”

Even more enticing is the improved music – this time, instead of strictly sampling, Butterfly and crew bring in live musicians and interpolate their own arrangements of various jazz riffs. The resulting songs are as dense and rich as a chocolate truffle – still jazzy but packing more punch and layers of sound. Standouts include the sublime, melancholy “The Art of Easing”, the hard funk snap of “Blowing Down” and the lushly expansive feel of “For Corners”.

Alas, the Digable’s era was short-lived as the jazzy sway of the New School would soon come to be replaced by the hard-knock tales of hip-hop’s neo-thugs, pimps and hustlers. Still, for about one shining year, Digable had us all speaking in insect dialects and funky Afrolistics. It was good to be there.